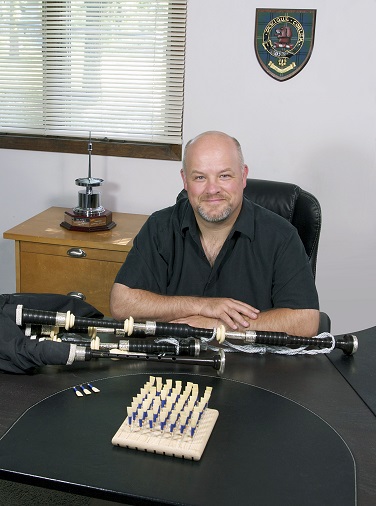 Question: Who is Adrian Melvin? Where are you from?
Answer: I am from Dundee, Scotland. I started learning piping from my father, Kenneth T Melvin and was later taught by PM Ian Duncan of the Vale of Atholl. I have played in bands for over 35 years mostly at the Grade 1 band level. I was fortunate to win the World Pipe Band Championships with the Victoria Police pipe band in 1998.

Question: When, why and how did you start making your own reeds?
Answer: I started learning how to make pipe chanter reeds during my stay in Australia about 1993 onwards from Bill Travaille who had a wealth of knowledge for reedmaking and also helped Mike Gilmour. I wanted to learn how to make reeds so I could have my bagpipe entirely playing my reeds.

Question: How does the idea of selling your own reeds came up?
Answer: I have taught for many years but I have always wanted to have my business in reedmaking as I was fascinated with the MacAllister family of reedmakers.

Question: Where in this world Melvin Reeds are being played?
Answer: My reeds are played all over the world including  North America, UK, Germany, France, Australia, New Zealand and Japan.

Question: What are your aims for the next 5 years?
Answer: To add to my product line which currently is Pipe chanter reeds and cane drone reeds.

Question: If you could start again, with the knowledge you have know – would you do everything exact the same way?
Answer: In hindsight I would approach the making of machinery differently because your tooling has to be custom made .

Question: Can you tell me in one sentence what „Melvin Reeds“ are standing for?
Answer: The reeds are made to have a high precision sound with consistency of product maintained by a rigorous quality assurance process.